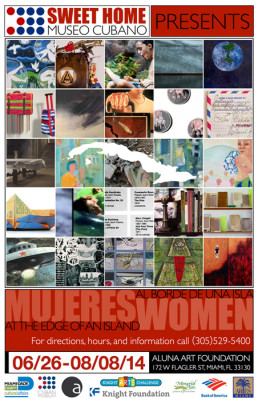 “Women at the Edge of an Island”, at Aluna Art Foundation, MiamiThe Cuban Museum, Inc. and the Aluna Art Foundation are proud to announce the upcoming exhibition Women on the Edge of an Island / Mujeres al borde de una isla, a group show that includes 23 visual artists from the Cuban Diaspora who explore through art the complex realities of displacement, biculturalism, separation, national identity, and personal and family upheaval that results from the experience of migration and exile.

This program is part of the Cuban Museum’s Sweet Home Museo Cubano Series, made possible by an Arts Challenge Grant from the John S. and James L. Knight Foundation; the Miami Dade County Department of Cultural Affairs, Board of County Commissioners of Miami-Dade; and additional support from Bank of America, Memorial Plan, ArtesMiami, and Friends of the Museum.

The show has been curated by Jesús Rosado and Ileana Fuentes and represents a collaborative effort with the Aluna Art Foundation. The exhibition opens on Thursday, June 26, 2014 with an opening reception at 5:00 pm.