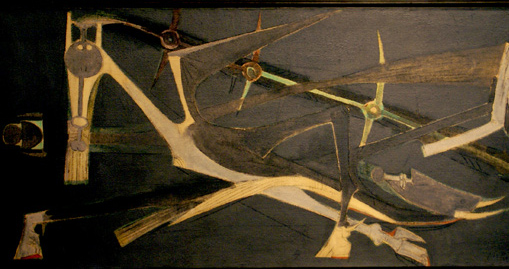 “There could be no doubt that Au Commencement de la Nuit (Bonjour Monsieur Lam) is also a self-portrait. The painting is carefully crafted to reveal in a flash the animal and anthropological forms in the darkness of the night. In Lam’s painting, a beast is depicted walking across the composition. It seems like it has stopped and, like in Courbet, it is turning its bearded head towards the spectator a similar invitation to make us recognize him.While Bonjour Monsieur Courbet is an easier painting to understand because the figures appear in broad day light, Bonjour Monsieur Lam is somehow more difficult to decipher. However, an attentive look at the hybrid creature reveals the fantastic complexity of how Wifredo Lam pictures himself . The first recognizable features are the hoofs of a horse and its elongated head, eyes and mouth. Following the neck on the diagonal, we discover that it is a winged horse. This mythical animal is also a woman : her breasts show distinctly under the wing and a second leg. Further to the right, a geometric second head with two prominent horns, eyes wide open and staring up towards his two arms and hands that close the composition on the right side with a protective gesture. A mysterious long shape with ribs or spines crosses the painting in parallel of the creature’s body : its presence echoes and accentuates the angular and fleshless qualities of the creature’s essential embodiment.”