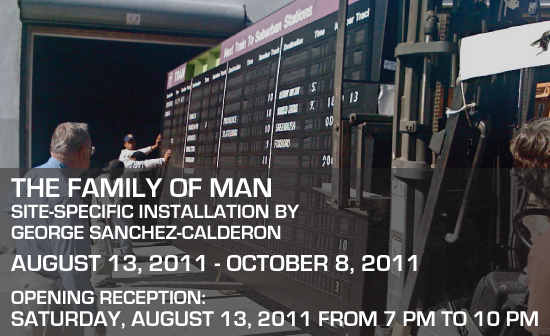 George Sanchez-Calderon is best known for his large-scale projects that engage architecture and address our modern condition. For the installation “The Family of Man, the artist is exhibiting a Solari train station sign as an assisted readymade. Appropriating the title from Edward Steichen’s seminal 1955 photography exhibition at the Museum of Modern Art, the artist creates an environment that invites the audience to see a matrix of destinations and timing impaired by the function and sound of this modern relic.
George Sanchez-Calderon received his MFA from The Rhode Island School of Design (RISD) in 1995 and a BFA from Florida International University (FIU) in 1993. For Art Basel Miami Beach, Sanchez produced a re-production of Le Corbusier’s Villa Savoye under intersate I-95 in downtown Miami as well as hosted an art circus. In September 2011, he is opening a “modest gallery: in downtown Miami titled “TOMORROWLAND”.