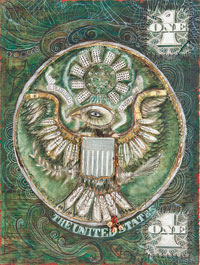 Donald Rubin, founder with his wife Shelley of New York’s Rubin Museum of Art, which focuses on the art of the Himalayas and which he has stocked with 3,800 works, has been amassing since 2009 what may be the world’s biggest private collection of contemporary Cuban art. According to his curator Rachel Perera Weingeist, at the last count there were 543 works by some 60 Cuban-born artists.

There are few sculptural works in the collection, because Rubin prefers two-dimensional pieces that can be readily hung in rooms, but Clara Morera is another favourite (he owns 13 works)whose mixed-media-on-wood assemblages feature in the current show. Found-art imagery of the US dollar combined with Cuban pesos and Cuban Convertible Pesos jokily sugest that the two economies may in fact be one.