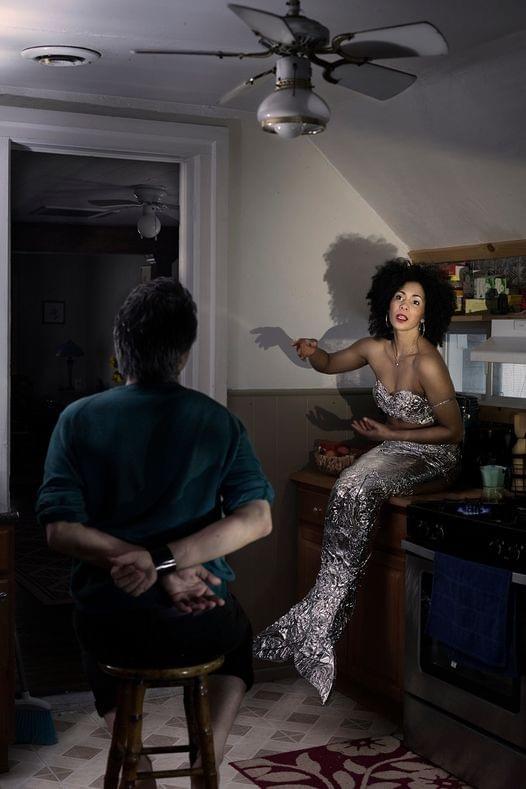 Cuban-born visual artist, Geandy Pavón, created a series of stunning photographs during the quarantine of 2020.  Quarantine: 40 Days and 40 Nights is now on display at the Coral Gables Art Museum.  Guests can visit the exhibit in the museum’s Community Meeting Room until February 1, 2021.

Starting on March 18, 2020 Pavón, originally from Las Tunas, Cuba, released a photograph a day on social media for forty days.  Along with his partner,  Imara López, they produced visually captivating images, which garnered them a following. Using the internet as a lifeline, he connected with people through the imagery. They captured scenes detailing domestic struggles of life during the lockdown, but they turned them into poetry.

Using limited resources while trapped in López’s Buffalo, NY apartment, the artists wowed his viewers with his imaginative creations. He used simple objects such as flashlights and cardboard to reenact art history classics and popular religious rituals.

In addition to the photographs, Pavón recorded video narrating the process of creating the artworks. In the exhibition room, guests will enjoy A soundtrack by renowned musician Paquito D’Rivera, created specifically for the exhibition. The soundtrack is comprised of two versions of the iconic La Bella Cubana, written by Afro-Cuban 20c composer, José Lafitte White.This exhibition was originally exhibited virtually at the Art Museum of the Americas in Washington, D.C.

Link to In art we trust