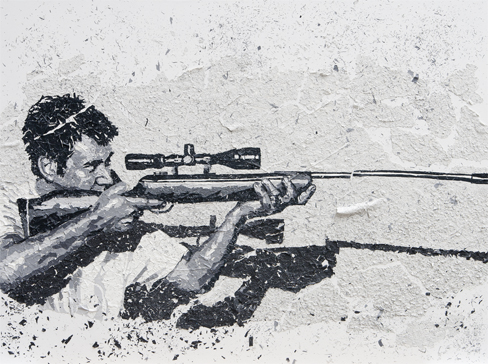 Pavel Acosta: Stolen Paint.  -Going beyond the legal boundaries, and stealing the state property is an expanded exercise in Cuba. It has even become morally acceptable action — a payback for earning very low salaries, which are not enough to cover the basic needs of a regular worker, in a centralized economy. My recent work was born out of trying to translate this survival strategy into my creative process. Some of my photography series document illicit private businesses the government sees as a form of robbery, like owning a gymnasium for bodybuilding (Stolen Talent, 2009), creating new car designs, by merging old automobiles with modern pieces (Stolen Talent, 2009-2010), or privately using abandoned public spaces (Stolen Spaces, 2006-2009). Another body of work is developed using collage on different media. Stolen Paintings (2008-present) is a series of collage on canvas and paper, which I also started in Havana. There, I used layers of dry paint, which I collected from walls, and found objects in the city. After coming to live in New York, I turned this process into a working technique that is subordinated to specific ideas. Most of the time, the layers of acrylic are prepared in my studio, on top of a glass, to later use it for “dry painting.” In the case of Wallscape, an intervention in El Museo’s collection display, I will reproduce the painting hung in the wall in front of mine —Goat Song # 5: Tumult on George Washington Avenue, 1988, by Manuel Macarulla. I will collect the layers of old paint in my wall, and use this material to reproduce it at a 1:1 scale, as if my wall was reflecting it.