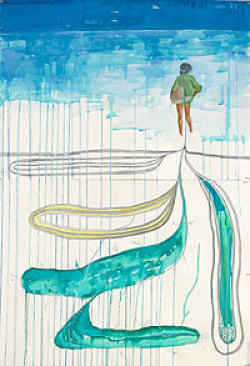 Maria Magdalena Campos-Pons: MAMA/RECIPROCAL ENERGY will be the first exhibition that examines this internationally recognized artist’s drawings. Five large-scale, mixed-media drawings, works that the artist created as a means to explore themes central to her practice, such as issues of identity, exile and displacement as a Afro-Cuban artist living in America, will be included. In addition to these works, drawings that address specific performances the artist has presented over the course of her career, one of which is a collaborative work she created with her son, will also be featured. This later body of work is the artist’s attempt at “putting the [performances] in a memory box, [in order to create] the essence of the moment.” The drawings will be accompanied by a three-channel video work that examines questions surrounding the nature of energy from an intriguing perspective.

Born in Matanzas in 1959, Campos-Pons was educated in Cuba at the National School of Art (1976ñ1979) and Instituto Superior de Arte (1980-1985) and graduated from Massachusetts College of Art in 1988. She is one of the most significant artists to emerge from the Cuban post-revolutionary era. She moved to North America in 1991 and now lives in Brookline, Massachusetts, with her husband, the composer and performing artist Neil Leonard, and their son.