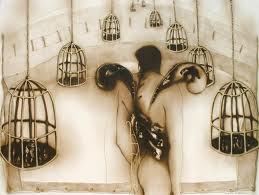 Humberto Castro is a Cuban artist born in Havana in 1957.  He is a graduate from the San Alejandro Academy of Fine Arts in 1977 and earned his master degree from the Higher Institute of Art of Havana in 1984.

The exhibition at Farside Gallery will highlight the relationship between man and animals in Humberto Castro’s artistic exploration.  The exhibition also showcases the close connection between his drawings, which span over several decades, and various recent paintings.

In 1983, he founded the team Hexagon in which, alongside other artists, he mounted installations aimed at provoking public participation in the work.  Castro is one of the most active members of the group widely recognized as the “Cuban 80’s Generation”, which generated changes in the aesthetic and conceptual art scene of the island.

In 1989 he immigrated to France, where he lived for ten years and became active in the Parisian intellectual scene, holding exhibitions and giving conferences across Europe. Castro was an appointed member of the Maison des Artistes Français and he received the prize Toison d’Or at the Art Jonction fair in Cannes in 1994. Thereafter, he moved to the United States, where he lives and works since 1999.

Free parking is available across the street at the Central Bible Assembly of God on opening night.