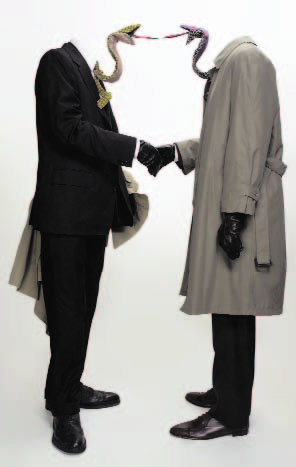 LECTURE:
From The Bottom of the Heap: recycled Clothing as a Form of Expression
Free and open to the public
Thursday, September 15, 6:30pm
At the Kemper Art Museum in conjunction with Sam Fox School
of Art & Design

Guerra de la Paz is the composite name that represents the creative team of Cuban born artists, Alain Guerra and Neraldo de la Paz. Follow the Leader is an installation named after a popular children’s activity that most of us are familiar with: where the object of the game is to pick a leader and then line up behind. Guerra de la Paz take on this game is inspired by the subtle yet compelling message behind it. Resonating social order and natural selection, the installation transcends child’s play as it worms its way through the space, touching on the uncanny parallels between this harmless pastime and the complexities of hierarchy in society, where “survival of the fittest”, delineated by Darwin’s theory of evolution, reigns supreme at the heart of all competition. Guerra de la Paz began working with garments as a material and saw themselves as vehicles guided by the essence and silent histories of the discarded clothing. The installation aims to depict both a harmonious pecking order and the ramifications of decline.