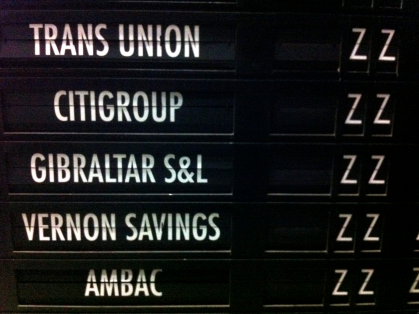 It’s impossible to miss by the sounds of it: the clickety-clack of a split-flap departures board reverberated through a tiny ante room in the 30,000 square-foot De la Cruz Collection on the busiest evening of the month for art patrons in Miami, called “Second Saturday.” Entitled “The Family of Man,” after Edward Steichen’s landmark 1955 photography show at MoMA, Miami-based installation artist George Sánchez-Calderón revives the aforementioned exhibition’s concern with the migrations and transitions of the ordinary citizen, but also sharply comments on the seemingly intangible economic institutions and their lack of transition alongside that citizen’s thirst in their torrid, financially-driven world.

George Sánchez-Calderón received his MFA from the Rhode Island School of Design (RISD) in 1995 and his BFA from Florida International University (FIU) in 1993. Sánchez-Calderón produced a true-scale recreation of Le Corbusier’s Villa Savoye beneath Florida Interstate I-95 during the first Art Basel Miami Beach in 2002. He will open a small gallery space in Downtown Miami called TOMORROWLAND in late 2011. Sánchez-Calderón lives and works in Miami.