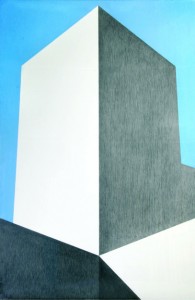 New York, NY— Frederico Sève Gallery is pleased to present  is pleased to present Shaping Light, an exhibition of works by Emilio Sanchez (1921-1999) featuring thirteen paintings and works on paper completed from the early to mid 1970’s. The Cuban-born American artist developed an early fascination with light and shadow on colored forms, and is celebrated for his architectural geometric abstractions, which are distinguished by their simplified forms.

Shaping Light includes a series of works on paper that were influenced by his life in New York City, to where he proudly relocated in 1944 and remained until his death more than five decades later. While the 1960’s made way for a period of significant exploration in abstractionism in the artist’s life, the following ten years marked a time of architectural paintings and works that defines one of the highlights in Sanchez’s oeuvre.