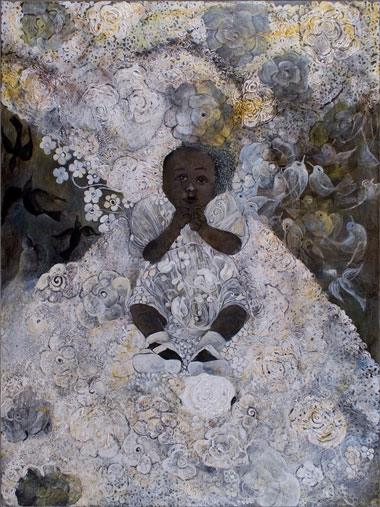 DEMI: Some Thoughts on her Work

Although I had seen DEMI’s work in reproduction for the past decade or so, a recent direct encounter with a substantial amount of her paintings and drawings has brought me to this sheet of paper and the thoughts that follow.

DEMI began painting in Spain in 1983. Her only technical orientation came from her husband, the painter Arturo Rodríguez. Since then she has developed a body of work whose vision is unique, and whose pictorial craft has become more complex and rich with time. Her recent solo show at Salamatina Gallery (Manhasset, NY) consisted of 16 large acrylic on canvas paintings and a small group of drawings in mixed media. This is the first time that the artist exhibits her graphic work; these drawings are simply marvelous. With coloring pencils, various pens, watercolor and ink, DEMI’s lines move across the paper from the subtle and delicate to the harsh and strong. These works are composed in an open and flexible manner, in them drawing becomes an adventure without dogmas, whose lyricism and freedom reminds us of the best of Paul Klee.

The canvases are large and layered, populated by those strange children of DEMI’s, who evoke ancient wise men and women, or outsiders that in reality are enlightened visionaries. Her work is not sentimental or kitschy, on the contrary. Within it there is an almost hallucinating resistant quality which is hard and tough. It dismantles sweet and simplistic visions of childhood. I dare say, without asking the artist, that her painting is profoundly spiritual. I see in the work a preoccupation with the space inhabited by human beings; that which exists between earth and the infinite, and depicts the sacramental relation between figure and environment. In a work such as One More Day on Earth, which is the title of her exhibition, we see a battle waged between the children of light and those of darkness. Innocence is the source of strength of these bald little girls, and it appears visualized as light, which becomes the weapon in the struggle against darkness. Two other extraordinary canvases dominate this consistently strong exhibition: Who is Afraid of the Big Black Bear and Black Angel. The first depicts children playing in a dark room while a large stuffed bear observes them from the rear of the composition. Painted in browns, ochre and pinks, the picture evokes mystery and uncertainty. The children stare at us and at the bear. They, us, we, sense the future terror of their world with the loss of innocence and arrival of experience.

Black Angel quite simply belongs in a museum. The painting is an icon of innocence surrounded by the infinite possibilities of the color white. The child evokes the salvific qualities of the child Jesus, and obviously also the African identity of much of Caribbean culture, into which as a Cuban, the artist was born. But beyond my limited iconographic interpretation, this work is just good painting with a capital P, where DEMI bets on the power of the pictorial surface and wins. What could have been a mannered and saccharine image is transformed into an icon of innocence as strength.

I reject the past comparisons between DEMI’s paintings and those of Frida Kahlo. Kahlo’s pictures are tortured and materialistic, while DEMI’s are spiritual and redemptive. She belongs to the family of visionaries such as England’s Richard Dadd or Mexico’s Jesús Reyes Ferreira. Like their worlds, hers is unique and it escapes comparison. We have to see it.