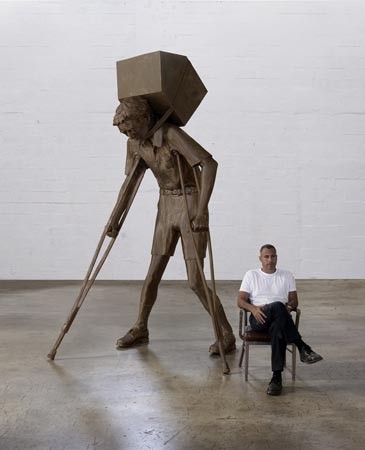 Cuban American artist Enrique Martínez-Celaya was selected by a commission from the Hermitage Museum to present his sculpture entitled La Torre de Nieve (The Snow Tower) in the Great Courtyard of the Winter Palace in Saint Petersburg. The work will remain there from July 11 to November 21 of 2012.

La Torre de Nieve addresses migration, the loss of opportunities, and redemption. These themes are embodied in the figure of an overwhelmed looking young individual in crutches who is shown carrying a house on his head and back. This house is tied to the character by a cord tightened around his neck. The sculpture was created in bronze and is 15 feet high.

According to Martínez-Celaya “… La Torre de Nieve represents a journey and the hope of finding a new place for this ‘home.’ This notion of ‘home’ is both metaphorical and physical…”