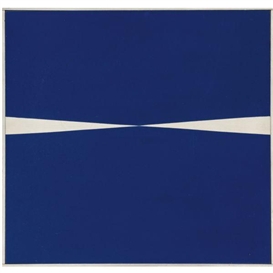 The Dean’s Gallery, the MIT Sloan School of Management

Carmen Herrera in group show IMAGE TRANSFER.  -A number of technologies make it possible for an artist to produce multiple versions of an original design. Selected from the MIT List Visual Arts Center’s Permanent and Student Loan Art Collections, works in this exhibition highlight a range of image transfer techniques and consider how an artist’s choice of reproduction technology can operate in relation to the image reproduced.

Screenprinting is the image transfer technology used by a number of the artists in the exhibition, a process wherein a fine mesh-like screen is stretched across a frame, itself hinged to a baseboard, and a stencil is attached to the screen. A support such as paper is placed below the screen and a squeegee is used to push ink across the screen and to areas on the support not masked by the stencil. The empty intersections delineating Carmen Herrera’s works from 2009 makes plain the presence of the stencil in their construction; the prints do not represent themselves so much as establish connections with surrounding space and the process whereby they came into being. Mel Bochner’s Untitled, 1984, investigates the relationship of thinking, seeing, and drawing and how this can be held in tension with the mechanical repeatability of the screenprinting process. What appears to be erasing in the work is actually masking by the stencil, while the drips and irregularities makes evident the dimension of time—both human and technological—in the process of the work’s creation.