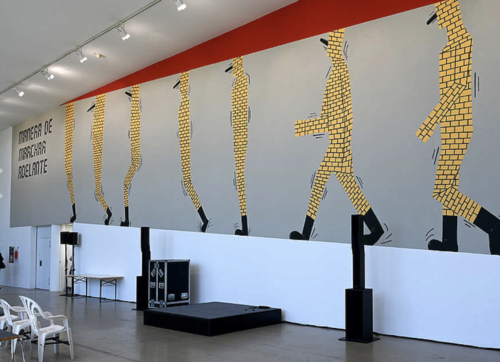 (Born out of an artistic action in Havana, Cuba, when, in May 2015, the artist and activist Tania Bruguera held a collective reading of Arendt’s The Origins of Totalitarianism, 1951)

On the outside wall of the halls with works of the group appears the reconstruction of a mural by Carlos Rodríguez Cárdenas (* 1962 Sancti Spíritus, Cuba), in which the artist satirizes the “revolutionary” propaganda of the Cuban government. The artist painted it in 1988-1989 on a wall at the corner of Avenida de los Presidentes y 15 in Havana’s Vedado neighborhood. The text translates as “A way to march forward”.