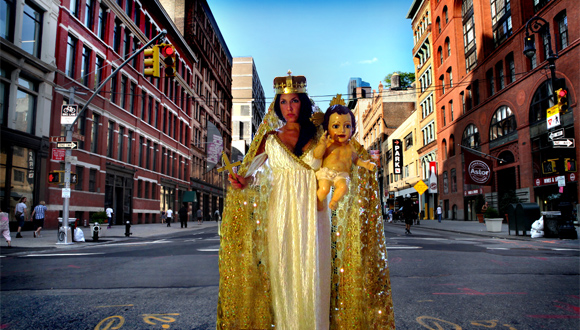 The Cuban-American visual-performance artist and architect Caridad Sola produces work with one intention – to create unforgettable experiences. She exposes viewers to powerful rituals and provocative metaphors with her passion for the grandiose, the dramatic, and the theatrical.

The performance Our Lady of Apparitions explores the belief in the unbelievable through anomalous, quasi-perceptual experience of apparitions. The artist will perform her own appearance of each Catholic saint she was named after (La Virgin de la Caridad, La Virgin de la Mercedes, and Santa Barbara.) Each day she will begin to appear from the Western point of 14 Street and travel across to its most Eastern point.

October 6-12, beginning two hours before sunset
The performance will begin at the west end of 14th street and end at the east end of the street.