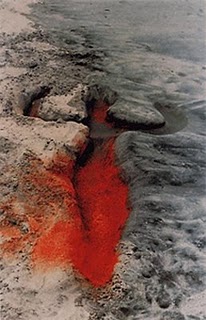 A prolific performance artist and filmmaker with strong feminist leanings, Mendieta rose to prominence in the mid-1970’s before her mysterious death in 1985. She often used the body as both a canvas and a paintbrush, her early work exploring blood rituals, crime scenes and physical abuse. Throughout her career, Mendieta’s work was grounded in the intrinsic connections of the natural world.