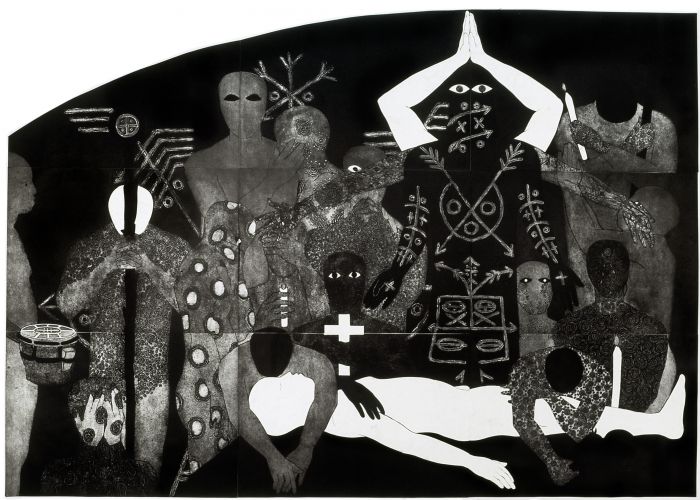 Afro-Cuban Art from José Bedia and Belkis Ayón. -The rich history of Afro-Cuban art is deeply steeped in the mythology of religion. Two artists with Afro-Cuban roots are exploring the symbols of their ancestral spiritual tradition, Santería. Belkis Ayón and José Bedia are collaborating in an online exhibition from the Museum of Latin American Art. The Afro-Cuban Experience in Art presents paintings that represent themes from this mythology. It will be available until October 21, 2021.

The late Belkis Ayón (1967-1999) produced a large amount of work in the late 1990s that had to do with themes of the Orisha religion. She focused on the Abakuá in her black, white and grey works of printmaking. It’s a secret all-male society that originated in Calabar, Nigeria. The religious-cultural group is one of the few that has remained present in Cuba since colonial times. Ayón discovered the mythology of the group when she was studying at the San Alejandro Art School in Havana.  She read about the tribe of mysterious men in the writings of Lydia Cabrera and Enrique Sosa. Her works juxtapose white and black shadowy creatures, hairless with elongated fingers. The black figure appears to wear a face mask that covers everything but his eyes. Long limbs extend out from objects that look like faces with trees.

José Bedia focus is more on the religions of Santería and Palo Monte, which is Amerindian in nature. So the connection is stronger to nature there. He currently resides in Florida.